One of the biggest events of the 2003 Mighty Atom Birthday celebration was Robodex, an exhibition of robots held in Yokohama on April 6 of that year. The event focused on sharing the future of robotics in Japan with emphasis on showcasing more human-like robots, such as the Honda Asimo, instead of the boring industrial kind.

The event included an Astro Boy display by way of the "Atom Dream Factory", where a life-size motorized Astro was lying on an operating table, being attended by robotic appendages. Every 30 minutes, Astro would sit up and raise an arm. 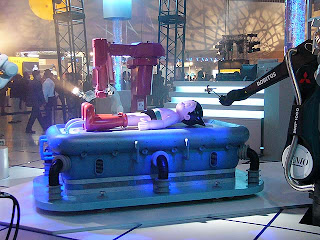 More pictures from Robodex 2003 can be found here. It really looks like something straight out of an episode of Astro Boy.

Although Robodex 2003 was a grand, exciting display of the incredible advances that Japanese developers have accomplished, this particular Astro Boy robot was strictly ornamental and incredibly basic by comparison to the other robots at the event. It was mostly there as a tribute to what the character has done to inspire robotics in Japan and as symbol for the hopes and dreams of what is yet to come. No doubt caught up in the hype surrounding the Mighty Atom's birthday, crowds ate it up.

Here is Osamu Tezuka's son, Macoto, posing for a photo op with his father's famous creation. 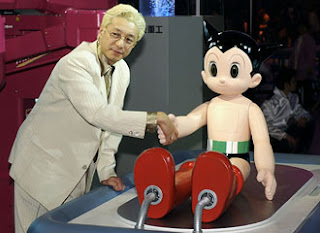 The article that this picture was attached to has some great info on the history of Astro, Osamu Tezuka, the 2003 anime, and the movie that Columbia pictures had planned which has since been scrapped. You can read it on Web Japan or by clicking the link below to continue reading here.

HAPPY BIRTHDAY ASTRO BOY!
Celebrating the Birth of the "Robot with a Heart" (April 21, 2003)

Many Japanese adults grew up with the cartoon character Astro Boy (known in Japanese as Tetsuwan Atomu, meaning Mighty Atom). Astro Boy first appeared in Shonen magazine in 1952. Later, starting in 1963, he starred in an animated TV series, of which 193 episodes were made. This cartoon was extremely popular, maintaining an average viewership rating of 30%. In the fall of 1963, the Tetsuwan Atomu series crossed the Pacific to the United States, where 104 episodes were aired on NBC under the name Astro Boy. Like their Japanese counterparts, many American adults no doubt feel nostalgic for their childhoods when they see the Astro Boy character.

Real Time Catches Up with Astro Boy's Birthdate
Astro Boy's creator, the late manga (cartoon) artist Osamu Tezuka (1928-1989), set the Tetsuwan Atomu series in Japan 50 years in the future. On April 7, 2003, real time caught up with the fictional birthdate Tezuka chose for his character. When Astro Boy first appeared, Japan was just beginning to pick itself up from the rubble of World War II. Tezuka gave his creativity free rein, and his futuristic portrayal of the transportation networks and cityscapes of twenty-first century society anticipated today's computerized world with what was, in some respects, a startling degree of accuracy.

So has the modern age caught up with Astro Boy's world? Certainly, the high-rise buildings that dominate the Tokyo skyline and the superhighways that crisscross the country could have been lifted straight from the near-future world depicted by Tezuka. But what about the main character Atomu himself? Does he have an equivalent in today's real world?

A Robot with a Heart
With the aid of jet-propelled footwear, Astro Boy flew through the skies at supersonic speed. He had strength equivalent to 100,000 horsepower and could speak 60 languages. But his most important feature was that he had a heart and experienced emotions.

For better or worse, modern civilization has yet to create a robot with a heart. Though research into artificial intelligence is moving forward, nothing has yet been created that comes close to replicating human emotions. On this point, Tezuka's vision was too far ahead of its time.

In commemoration of Astro Boy's birthday, the character is returning to TV screens in his first new series for 22 years, Astro Boy Tetsuwan Atomu - to be aired by the stations of the Fuji Television Network. This comeback series, produced by artists who were heavily influenced by Tezuka, consists of 50 episodes that will air over the coming 12 months. The theme of this series is "the robot with a heart," and the focus is on Astro Boy's preoccupation with his own consciousness. According to the director of the series, Kazuya Konaka of Tezuka Productions, "The theme is the relationship between humans and robots. As Atomu wrestles with his status as a robot, humans have trouble deciding how to treat a robot with a heart."

Astro Boy on the Silver Screen?
The new Astro Boy series will be broadcast in the United States, too. And word has it that in 2004 a major Hollywood studio, Columbia Pictures Industries Inc., will invest $100 million in making a film based on the series. Meanwhile, Astro Boy's Birthday Party, a festival of animated-film screenings and exhibitions, began on April 6 in the Little Tokyo area of Los Angeles and will run for two months.

Naturally, a variety of birthday events are scheduled in Japan. Robodex 2003, one of the world's largest robot shows, took place in Yokohama from April 4 to 6. Robodex 2002 made headlines for the Asimo, an upright-walking robot created by Honda that can walk up and down stairs, and the SDR-4X, a Sony robot that can dance and sing. This year's event witnessed the introduction of a silver-colored Asimo that can walk twice as fast as the previous model and many other robots designed to do real work in human society, such as nursing care and security. At the center of the venue there was a display called Atom Dream Factory, which featured real industrial robots gathered around Astro Boy acting out the moment of his birth.

For anyone visiting Japan during this time, one spot that is well worth a visit is the Tezuka Osamu Memorial Hall in the city of Takarazuka, Hyogo Prefecture, where Tezuka spent his youth. Visitors to the country are also likely to encounter whimsical tributes to Astro Boy's birthday in some unexpected places. For example, in Tezuka's original manga, Atomu was born in the Tokyo district of Takadanobaba. Now, each time a train leaves JR Takadanobaba station, its departure is announced by the playing of a few bars from the Tetsuwan Atomu theme song over the station's public address system. So anyone standing on the platform is able to hear the famous melody that once captured children's hearts.

The number and variety of tributes to Astro Boy reflect the great affection felt by so many people in Japan and elsewhere toward this lovable robot.

Your comments on this post are appreciated. Please return sometime to check for a response.